Henry Wong bubbles over with support for Fisher House 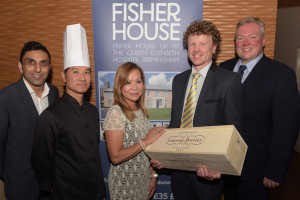 Diners were treated to a selection of the restaurant’s finest cuisine with each course being partnered with a carefully selected accompaniment from the luxury Champagne house.

The event raised £8,500 for the restaurant’s chosen charity for 2016, which is a ‘home away from home’ for injured military personnel based at Birmingham’s Queen Elizabeth Hospital.

Mike Hammond, chief executive of QEHB Charity, says: “It costs the charity £250,000 a year to run the facility and we rely entirely on the generous support of individuals and companies. We’re extremely grateful to Henry Wong and its continued support and are delighted at the success of this recent event. Since its opening in 2013, over 2,000 people have used Fisher house, providing the equivalent of over 11,000 nights of free accommodation to military patients and their families. The money generously raised by this fantastic event will go a long way in supporting more families in their time of need.”

Owner of Henry Wong, Parm Rai, added: “We’re really pleased to be able to support a local charity which does such important work. The evening was a huge success and we look forward to working with Mike and the team again on the next event.”